To share your memory on the wall of Dora Frances Baggett, sign in using one of the following options:

Print
Today we must say goodbye...
Dora Francis Nobles Baggett was born on January 11, 1932, to Samuel Earl Nobles and Velma Ruby Gibson Nobles. She died peacefully in her sleep May 21, 2019 at Bedford Care, Hattiesburg, MS.

Francis was called Mama and loved by so many, young and old. She always had a hot pot of coffee brewing and the porch light on ... anytime was good for her if it involved friends, family and conversation! And if you were really lucky with your timed visits, you could expect garlic fried chicken and banana pudding!

Francis grew up in Oloh and graduated from Oak Grove High School, wherein she was a member of the Lady Warrior Basketball team. She loved the sport and played many a game with her children and grandchildren! Also, while attending a basketball game, she met and married the love of her life, John W. Baggett and from this union, five (5) children were born. For many years, she was a homemaker and later retired from Murray Envelope. Retirement allowed her time for her sewing, gardening and cooking.

Visitation will be Saturday, May 25, 2019, from 12:00 to 2:00pm at Forrest Funeral Home in Hattiesburg, with services immediately following. Burial will be at Midway Cemetery, Oloh, MS.
In closing, the family of Dora Francis Noble Baggett would like to sincerely thank the staff of Bedford Alzheimer's Unit for taking such good care of our precious Mama.
Read Less

To send flowers to the family or plant a tree in memory of Dora Frances Baggett, please visit our Heartfelt Sympathies Store.

We encourage you to share your most beloved memories of Dora Frances here, so that the family and other loved ones can always see it. You can upload cherished photographs, or share your favorite stories, and can even comment on those shared by others.

Posted May 28, 2019 at 09:51am
I'm so very sorry for your loss, losing those we love is the hardest thing we have to experience. May your hearts find comfort in beautiful memories and Jesus words "...the hour is coming where all those in the memorial tombs will hear his voice and come out..."john 5:28, 29
Comment Share
Share via:
HS

Flowers were purchased for the family of Dora Frances Baggett. Send Flowers

Posted May 22, 2019 at 11:38am
With sympathy to the Baggett Family. A comforting Scripture is at Ecclesiastes 9:5. There it tells us that the dead know nothing at all. So, they are no longer suffering. The Bible also promises a time when death will be no more. Revelation 21:4. And the dead have the hope of a resurrection. Acts 24:15. I hope these Scriptures can be of comfort to the family.
Comment Share
Share via: 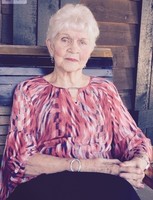